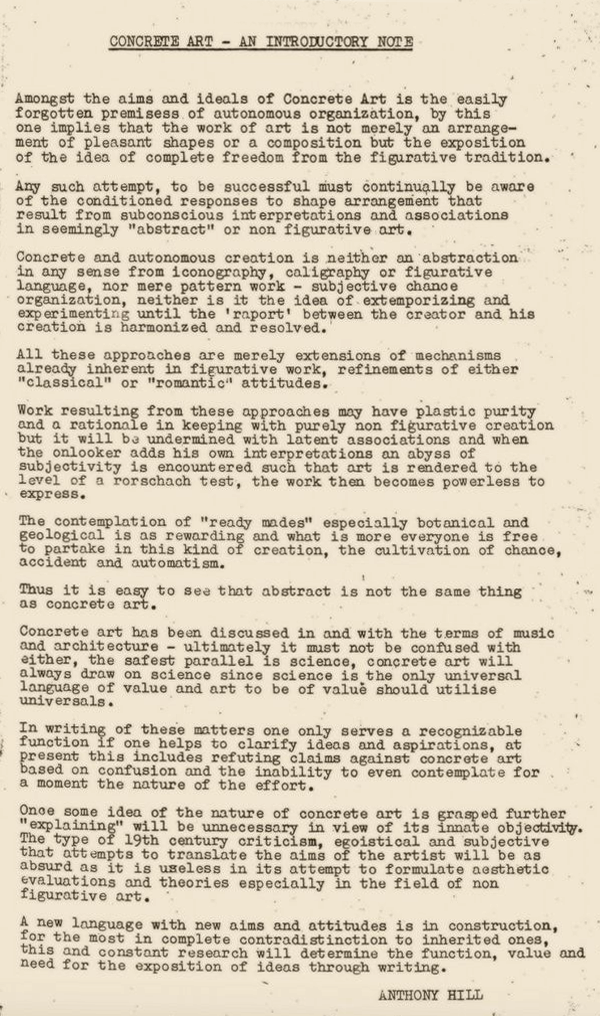 Amongst the aims and ideals of Concrete Art is the easily forgotten premises of autonomous organization, by this one implies that the work of art is not merely an arrangement of pleasant shapes or a composition but the exposition of the idea of complete freedom. from the figurative tradition.

Any such attempt, to be successful must continually be aware of the conditioned responses to shape arrangement that result from subconscious interpretations and associations in seemingly “abstract” or non figurative art.

Concrete and autonomous creation is neither an abstraction in any sense from iconography, calligraphy, or figurative language, nor mere pattern work – subjective chance organization, neither is it the idea of extemporizing and experimenting until the ‘raport’ between the creator and his creation is harmonized and resolved.

All these approaches are merely extensions of mechanisms already inherent in figurative work, refinements of either “classical” or “romantic” attitudes .

Work resulting from these approaches may have plastic purity and a ratio e in keeping with purely non figurative creation but it will b~ undermined with latent associations and when the onlooker adds his own interpretations an abyss of subjectivity is encountered such that art is rendered to the level of o rorschach test, the work then becomes powerless to express,

The contemplation of “ready mades” especially botanical and geological is as rewarding and what is more everyone is free to partake in this kind of creation, the cultivation of chance, accident and automatism.

Thus it is easy to see that abstract is not the same thing as concrete art.

Concrete art has been discussed in and with th therms of music and architecture – ultimately it must not be contused with either, the safest parallel is science, concrete art will always draw on science since science is the only universal langunge of value and art to be of value should utilise universals.

In writing of these matters one only serves a recognizable function f one helps to clarify ideas and aspirations, at present this includes refuting clams against concrete art based on confusion and the inability to even contemplate for a moment the nature of the effort.

Once some idea of the nature of concrete art is grasped further “explaining” will be unnecessary in view of its innnte objectivity. The type of l9th century criticism, egoistical and subjective that attempts to translate the aims of the artist will be as absurd as it is useless in its attempt to formulate aesthetic evaluations and theories especially in the field of non figurative art.

A new language with new aims and attitudes is in construction, for the most in complete contradistinction to inherited ones, this and constant research will determine the function, value and need for the exposition of ideas through writing.