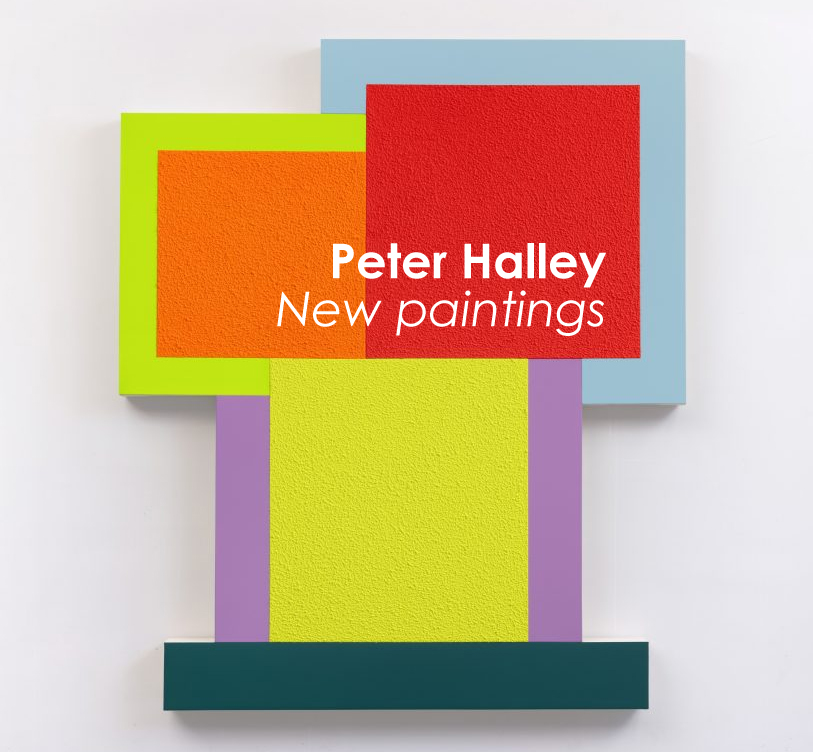 The show includes a series of paintings specifically conceived by Peter, who has already had four solo exhibitions with Galleria Massimo Minini: in 1997, 2000, 2008 and 2012.
These works are a new take on his classic geometric paintings: the characteristic depth of his artworks subsists, yet the irregularity of the perimeter makes them mobile, unstable, in a sort of precarious balance.
Halley is the most important American artist of his generation (the 1980s).
A contemporary of Jeff Koons, Haim Steinbach, Meyer Vaisman… from the very start, these artists set out to bring change into American art in the wake of minimalism and conceptualism.

Peter Halley was born in 1953 in New York. He began his formal training at Phillips Academy in Andover, Massachusetts, from which he graduated in 1971. During that time, Halley read Josef Albers’s Interaction of Color (1981), which would influence him throughout his career. From 1973 to 1974 Halley lived in New Orleans, where he absorbed the vibrant cultural influences of the city, began using commercial materials in his art, and first became acquainted with the writings of earthwork artist Robert Smithson. In 1975 the artist graduated from Yale University, New Haven, with a degree in art history. After Yale, Halley returned to New Orleans, where he received an MFA in painting from the University of New Orleans in 1978. He had his first solo exhibition at the Contemporary Art Center, New Orleans, that same year.
In 1978 Halley spent a semester teaching art at the University of Louisiana, Lafayette. He has continued to teach throughout his career. In 1980, Halley moved back to New York and had his first solo exhibition in the city at PS122 Gallery. At this time, Halley was drawn to the pop themes and social issues addressed in New Wave music. Inspired by New York’s intense urban environment, Halley set out to use the language of geometric abstraction to describe the actual geometricized space around him. He also began his iconic use of fluorescent Day-Glo paint.
In 1984, Halley started to exhibit with the International With Monument gallery, becoming closely associated with the organization and its artists, who exhibited conceptually rigorous work in a market-savvy, coolly presented space that stood in stark contrast to the bohemian, Neo-Expressionist flair of the East Village art scene at the time. In 1986, an exhibition of four artists from International With Monument at the Sonnabend Gallery in New York heralded the group’s growing success. By the late 1980s, Halley was exhibiting with prominent galleries in the United States and Europe. In 1989, an exhibition of his paintings traveled to the Museum Haus Esters, Krefeld, Germany; Maison de la culture et de la communication de Saint-Étienne, France; and Institute of Contemporary Arts, London. From 1991 to 1992, a retrospective toured Europe, with presentations at the CAPC Musée d’art contemporain de Bordeaux, France; Musée d’art contemporain, Lausanne, Switzerland; Museo nacional centro de arte Reina Sofía, Madrid; and Stedelijk Museum, Amsterdam. In 1992, the Des Moines Art Center hosted his first solo exhibition at a U.S. museum.
While developing his visual language, Halley became interested in French post-structuralist writers, including Jean Baudrillard, Guy Debord, Michel Foucault, and Paul Virillio, all of whom shared his concern with the character of social spaces in a post-industrial society. In 1981, he published his first essay “Beat, Minimalism, New Wave, and Robert Smithson” in Arts, a New York–based magazine that would publish eight of his essays before the decade’s end. Halley’s writings became the basis for Neo-Geometric Conceptualism (also known as Neo-Geo), the offshoot of Neo-Conceptualism associated with the work of Ashley Bickerton, Halley, and Jeff Koons. In 1988, the artist’s writings were anthologized in Collected Essays, 1981–1987, and again in 1997 in a second anthology, Recent Essays, 1990–1996.
In the mid-1990s, Halley began to produce site-specific installations for museums, galleries, and public spaces. These characteristically brought together a range of imagery and mediums, including paintings, wall-size flowcharts, and digitally generated wallpaper prints. Halley has executed permanent installations at the Dallas/Fort Worth International Airport, Texas, and the Gallatin School of Individualized Study at New York University. In 2011, his installation of digital prints Judgment Day was installed in the Palazzo Bembo in Venice as a part of the exhibition Personal Structures during the Venice Biennale. Halley has taught at the School of Visual Arts, New York; the University of California, Los Angeles; and Columbia University. He subsequently served as the Director of Graduate Studies in Painting and Printmaking at the Yale University School of Art from 2002 to 2011. From 1996 to 2006 he also published index magazine. Halley lives and works in New York.