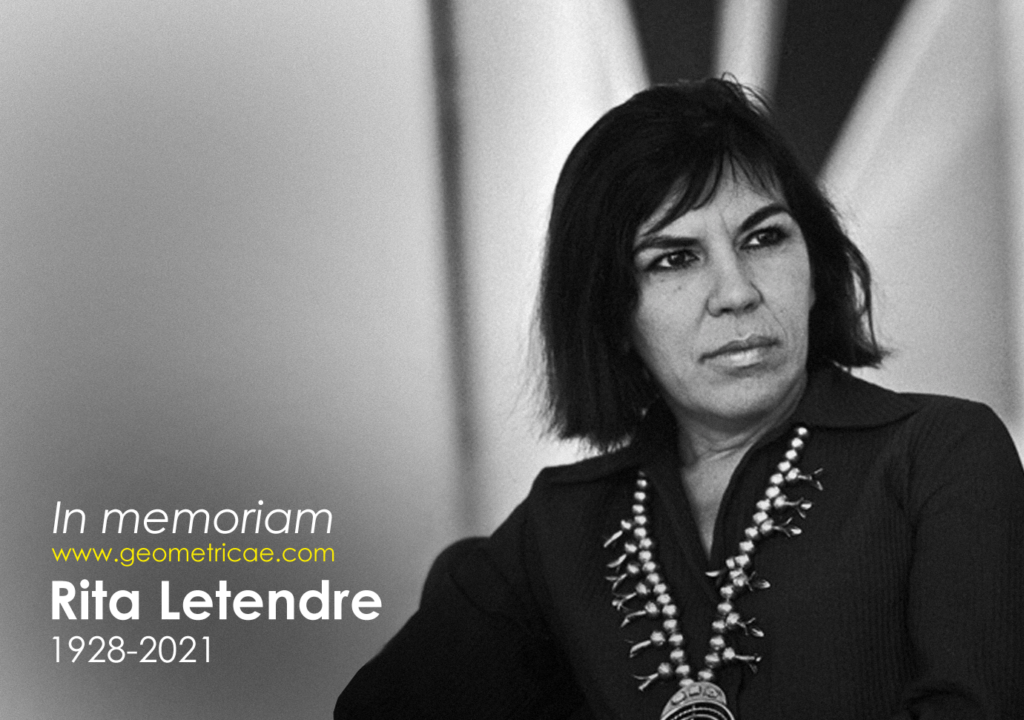 Rita Letendre moved to Montreal in 1942 with her family and cultivated her childhood passion for drawing into one of the longest and most illustrious artistic careers in Canada. After a brief period spent studying at l’École des beaux arts in 1948, Letendre discovered a circle of artists known as Les Automatistes who were experimenting with colour and form in a way that resonated deeply with her. These artists drew on life’s intensities and, like the young fiery Letendre, were determined to make their unique mark on the world. Letendre remained committed to their spirit of free expression and spontaneity of abstraction throughout her life. She would go on to rigorously experiment with space, movement, and tension working with oils, pastels, acrylics, palette knife, and eventually the airbrush, which she began using in 1971. Her intense and vibrant colour field paintings are composed of densely applied gestural strokes, evoking raw states of emotion and restlessness, which became a trademark.
Another defining moment came when she met her future husband, Kosso Eloul, on a trip to Spoleto Italy in 1962. Eloul was a Russian born Israeli sculptor and together they would work and travel the world, their union one of harmony, love and respect. Both Letendre and Eloul had tremendous energy and derived tremendous inspiration from one another. When they weren’t creating art, they were entertaining hundreds of guests in the townhouse they shared on Sherbourne Street in Toronto – a place that emanated warmth and hummed with life.
Letendre would go on to play a significant role in the history of public art in Toronto, where she was commissioned to create many large-scale public projects, including major murals at Ryerson University and Royal Bank Plaza, and the stained-glass skylights of Glencairn subway station. At the time, Letendre was often the only woman artist considered for – and awarded – such major commissions, and her involvement in public art was unprecedented. As major infrastructure developed throughout the 1970s, Letendre’s work continued to be featured in subway stations, universities, and offices buildings across the city. At one point, Letendre had as many as 12 public works on view, her most famous being Sunrise, a mural of 60 by 60 feet installed on the outside wall of the Neill-Wycik Building on Gerrard Street, and which has since been recreated in all its original glory at the Evergreen Brickworks in summer 2021. Letendre’s very first large-scale public work, a 24 by 21-foot mural titled Sunforce created for the University of California at Long Beach in 1965, has also recently been restored to its original state in honour of the artist.
She is a recipient of the Governor General’s Award in Visual and Media Arts (2010), is an Officer de L’ordre national du Québec (2002), an Officer de L’Ordre de Drummondville (2017), an Officer of the Order of Canada (2005), a recipient of the Queen Elizabeth II Diamond Jubilee Medal (2012), a Member of the Order of Ontario (2016), recipient of an Honourary Doctorate from L’université de Montreal, and a recipient of the Paul-Émile-Borduas Award (2016), a distinction reserved for the very finest and most significant contributors to the art of Québec. In 2017, Rita Letendre: Fire & Light, the first major museum retrospective of Letendre’s work to originate outside Québec, opened at the Art Gallery of Ontario, followed by Rita Letendre: Earth, Wind & Fire at the McMichael Canadian Collection in February 2019 and in November of that year was selected as the Invited Artist for the Eiteljorg Museum’s Contemporary Art Fellowship & Exhibition. Over the course of her career, Rita Letendre has had over sixty solo exhibitions and her works are in the collections of numerous Canadian and American museums, including the la Musée national des beaux-arts du Québec, the Art Gallery of Ontario, and the National Gallery of Canada.