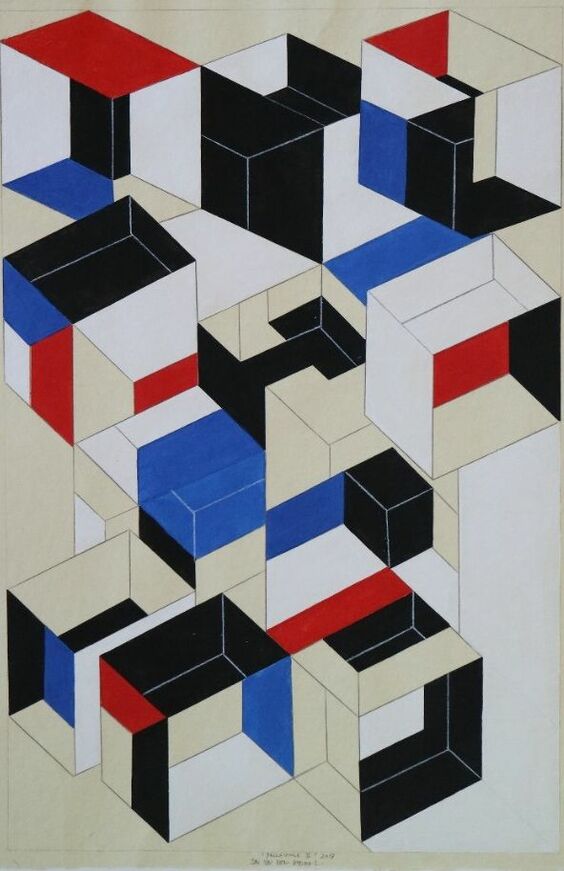 Gilbert Decock was born in Knokke at the Belgian coast in 1928. He studied at the Fine Arts Academy in Bruges. Since the end of the 1950’s the artist painted elementary forms such as circles, squares and triangles which are dialoguing on his canvases. His paintings and sculptures can be qualified as minimalist, ascetic, austere, symbolic, meditative and spiritual. In 1965 Decock became a founding member of the group “D 4” together with E. Bergen, V. Noël and M. Verdren. In 1967 Jo Delahaut joined the group whose name was changed into “Geoform”. Decock executed several monumental projects in his long career for Distrigas, the Knokke Casino and the Metro station “Arts-Loi” in Brussels.
A fine monography about the artist by Dr Serge Goyens de Heusch was published by Lannoo ( Tielt, Belgium ) in 1995.

John Van Den Abbeel (1943-2018) started to make pure geometric and constructivist works since 1965. He was co-founder in 1966, together with Yves Desmet and Willy Plompen, of the so-called “Plus-Movement Group”, which focused on the integration of art in its “living space” and a “continuous multi-sensorial experience” for the viewer. The group was in touch with other neo-constructivist artists both in Belgium (e.g. Amédée Cortier) and abroad. Characteristic of his gouaches and paintings is the grid of 36 beams. These beam shapes are used to express a well thought, three-dimensional construction. The pure representation of surfaces with the same colors, inspired by “constructive mathematics”, leads to a pictorial spatial structure. His work fascinates because of the new spatial experience. This three-dimensionality is accompanied by an optical effect : the image changes with the location of the work and depending on where the viewer is standing.

Albert Rubens, born in West Flanders in 1944, discovered in the 1960s the cubic form and its infinite potentials, not only as a flat surface but also on a three-dimensional level. Four distinctive features dominate the artist’s work. First there is a geometrical and concrete language of images. Secondly Rubens has been painting ever since exclusively in black on a snow white surface. Thirdly Rubens uses mathematics when preparing his compositions and makes a detailed study in pencil in his notebook before starting to paint, mostly in acrylic, on canvas. Finally, the artist invariably makes a whole series of works based on a very methodical approach.Rubens’ works have been widely exhibited since the mid-1960’s, both in Belgium ( a.o. the Royal Museum of Fine Arts in Brussels in 1986 with Walter Leblanc ) and abroad ( Netherlands, France, Germany, Italy, Poland, Austria, Hungary, Russia e.a. )
​​Group 2 Gallery has shown Rubens works in several thematic exhibitions : “The Power of Black & White” in 2014, “Geometric abstraction” and “From Rubens to Michaux” in 2016.

Chantal Coppieters t’Wallant (Brussels 1950) is a multidisciplinary artist making watercolors, ink drawings, pastels, acrylic and vinyl paintings. From the theme of sports ( skateboard – American football – motorcycles – F1 – cycling ), her work gradually evolved to Abstract Constructivism. Her work has already been shown in several thematic exhibitions at Group 2 Gallery : “The Power of Black & White” (2014) “Women in the frontline” (2016), “From Rubens to Michaux” (2016) and “Gouaches & watercolours” (2017).