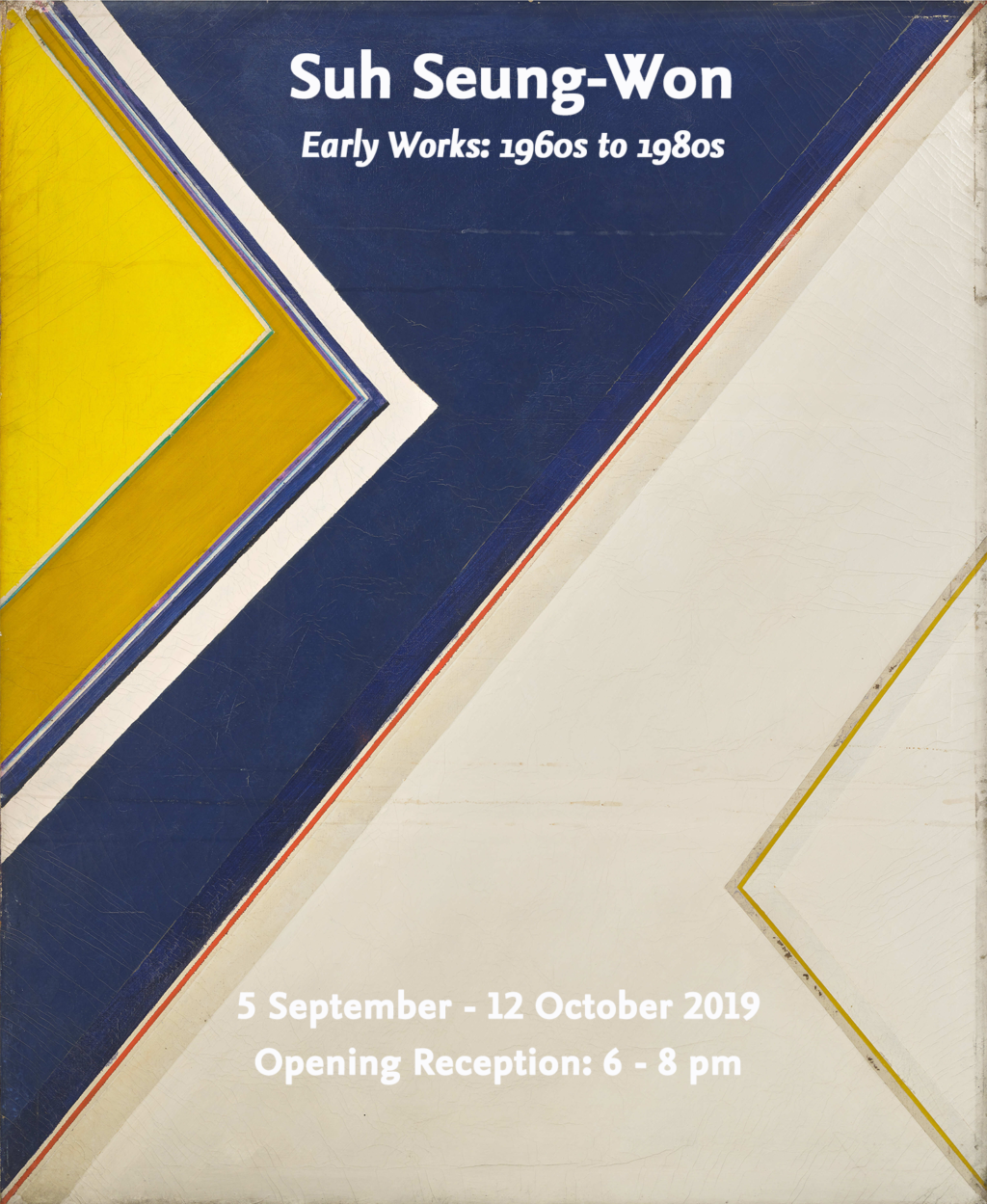 Tina Kim Gallery present its first solo exhibition of Suh Seung-Won (b. 1941), an artist who has played a leading role in the advent and evolution of modernism in Korea. One of the founding members of the “Origin” group, Suh is also celebrated for his major contribution to the formation of the A.G. (Korean Avant-Garde Association) and the ongoing development of Dansaekhwa. On view from September 5 through October 12, 2019, the exhibition focuses on two bodies of work from key periods in Suh’s early career: his “development” period in the 1960s and the “analytical” period, spanning the 1970s through the 1980s.
For over 50 years, Suh Seung-Won has consistently pursued a theory he terms “Simultaneity,” in which the artist seeks to distill his compositions to their most reductive state, while still maintaining a harmonious balance of form, color and space. The artist came of age in the context of post-war Korea, where there was uneven access to information about international movements such as Art Informel and Abstract Expressionism. It was in this dynamic environment that Suh sought to pioneer his own unique approach to geometric abstraction by synthesizing traditional formal vocabularies found in Korean culture such as the architecture of hanok (a traditional Korean home), and its characteristic use of changhoji (paper window partitions) to designate space.
Having received an MFA degree from Hong-Ik University’s acclaimed painting department, Suh Seung-Won made his debut on the Korean art scene as one of the founding members of the Origin group in the early 1960s. Shortly after, Suh became heavily involved in the A.G. collective (Korean Avant-Garde Association) founded in 1969, initially led by the Dansaekhwa master Ha Chong-Hyun. It was this fertile intersection of western abstraction and eastern philosophy that gave rise to Dansaekhwa and Suh, having adopted this conceptual synthesis, pushed it further, maintaining a commitment to gestural exploration and formal experimentation that has consistently defined his practice. While Suh invented his own vocabulary of geometric abstraction and expanded his color palette, he remained committed to the power of neutral tones, especially the color white that underlies Dansaekhwa and is rooted in both Korean hanji paper and porcelain; this underlying approach to balancing form and color can be seen in works such as Simultaneity 69-1 (1969) and Simultaneity 70-19 (1970). Evident in these paintings is the artist’s ongoing interest in creating a field in which three-dimensional forms and linear planes appear to float in the middle of the canvas, using perspective to create a psychologically charged space.
As a young artist, Suh was invited to participate in the seminal 1975 exhibition, “Korea: Five Artists, Five Hinsek – White,” at the Tokyo Gallery in Japan. A major international event in the history of Korean modernism, Suh exhibited works alongside Park Seo-Bo, Kwon Young-Woo, Hur Hwang, and Lee Dong-Youb. The show aimed at highlighting the way in which contemporary Korean artists had adopted monochrome practices, as well as strategies of repetition and material plasticity, and how these processes informed what would later be called Dansaekhwa.
The 1970s and the 1980s were a critical period in the artist’s evolution as Suh began to refine his own formal vocabulary, pushing the limits of the perspectival environments he had been exploring and expanding the way he depicted three-dimensional space within a two-dimensional plane. In this more “analytical” work, his canvases consist of taught compositions that are suspended between depth and surface, aesthetics and phenomenology. These themes can be seen to striking affect in Simultaneity 77-36 (1977), where the artist has created a complex series of intersecting geometric spaces that hold the viewer’s mind in balance as they seem to hover and unfold on the canvas.
In some ways this pursuit of spatial harmony mirrors personal influences on the artist such as the elements found in changhoji, the paper windows that lend a cool glow to Korean interiors. In this light, “Simultaneity” can be seen as referring to Suh’s ability to render the canvas as a flat-planed object and somehow also a window into the viewer’s consciousness. In the artist’s own words, “My aesthetic roots are planted in Korean traditional culture and its spirit, and I have strived to give a modern interpretation, which is expressed through the spirit of Simultaneity.”
By presenting a range of Suh’s early works, the exhibition at Tina Kim Gallery highlights a period of intensive experimentation for the artist, illustrating the formal rigor and personal evolution that underlies his ideas. The exhibition establishes the importance of Suh’s practice in Korean art history as well as within a wider international discourse.

Suh Seung-Won was born in Seoul in 1941 and graduated from Hong-Ik University with an MFA in painting. Having spent his university years in the aftermath of the 4.19 Revolution, he helped found the Origin Group and became a member of A.G. (Korean Avant-Garde Association). He has participated in major international exhibitions, such as the inaugural exhibition of the Korean Avant-Garde Association (1969), the 6th Paris Biennale (1969), the 11th São Paulo Biennale (1971), Korea: Five Artists, Five Hinsek – White (Tokyo, 1975), The Contemporary Korean Art (Tokyo, 1977), and Korean Contemporary Art: Unique Artistic Movement in the late 70s (Japan, 1983). Suh recently held a solo exhibition at the Korea Society in New York in collaboration with Donghwa Cultural Foundation.
His works are in the permanent collections of the National Museum of Modern and Contemporary Art, Korea; Gwangju Art Museum; Sapporo Contemporary Art Museum, Japan; Simoneski Metropolitan Museum of Art, Japan; The British Museum; and the Brooklyn Museum, New York among many others.

Located in New York, Tina Kim Gallery is celebrated for its unique programming that emphasizes international contemporary artists, historical overviews, and independently curated shows. Founded in 2001 by second-generation gallerist Tina Kim, it is noted for working closely with museums and institutions to expand the audience of its global roster of artists.