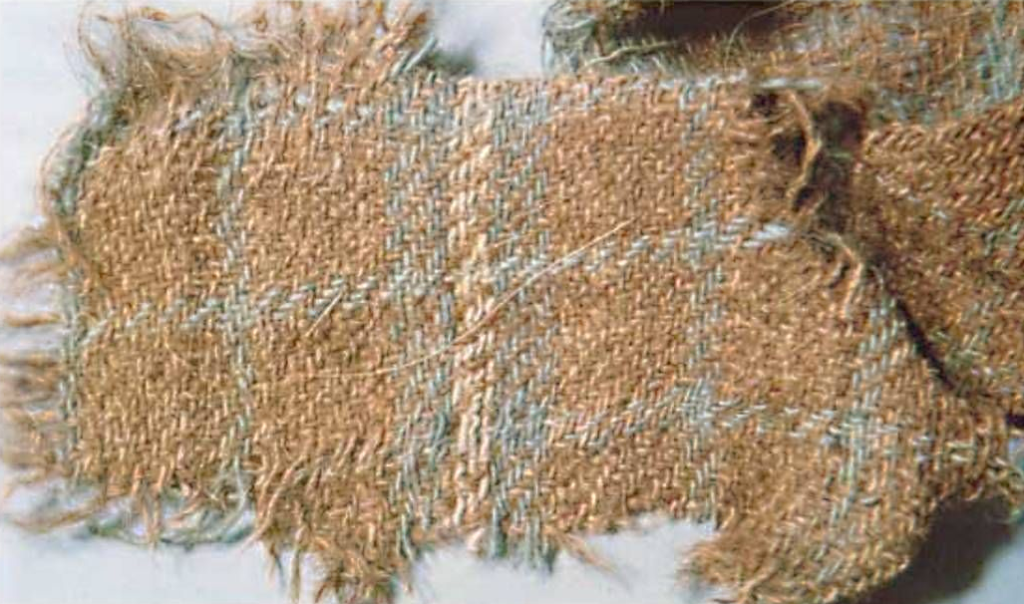 The earliest surviving sample of tartan tissue comes from the Tarim Basin in eastern China. In 1979 archaeologists working at a site called Qizilchoqa (Red Hillock) unearthed a cemetery containing mummified remains of individuals clothed in geometric kemp wool pattern fabric.
The cloth fragments on these mummies shows a common origin with Indo-European neolithic clothing. Textile expert Elizabeth Barber has noted its similarity with cloth fragments recovered from salt mines of the Hallstatt culture. Its closest resemblance to Scottish tartan of the 17th century, the feel of the wool, the twill, the number of color lines (up to six) as well as the varying thickness and thinness of color bands is strikingly familiar despite the age of the samples.
So far 113 graves have been excavated at Qizilchoqa, probably an equal number remain to be explored. Based on carbon-14 dating and on the style of painted pots found with the corpses, all the mummies here appear to date to around 1200 B.C. They are fully clothed in brightly colored woolen fabrics, felt and leather boots, and sometimes leather coats. The men generally have light brown or blond hair, while the women have long braids; one girl has blue tattoo marks on her wrist.
A sample of cloth was examined by University of Pennsylvania anthropologist Irene Good, a specialist in early Eurasian textiles. Examining the cloth under a low-power microscope, she saw that the material was not, strictly speaking, wool at all. Wool comes from the undercoat of a sheep; this material appeared to have been spun from the coarse outer hair (called kemp) of a sheep or goat. Despite the crudeness of the fibers, they were carefully dyed green, blue, and brown to make a ptartan design. They were also woven in a diagonal twill pattern that indicated the use of a rather sophisticated loom”.