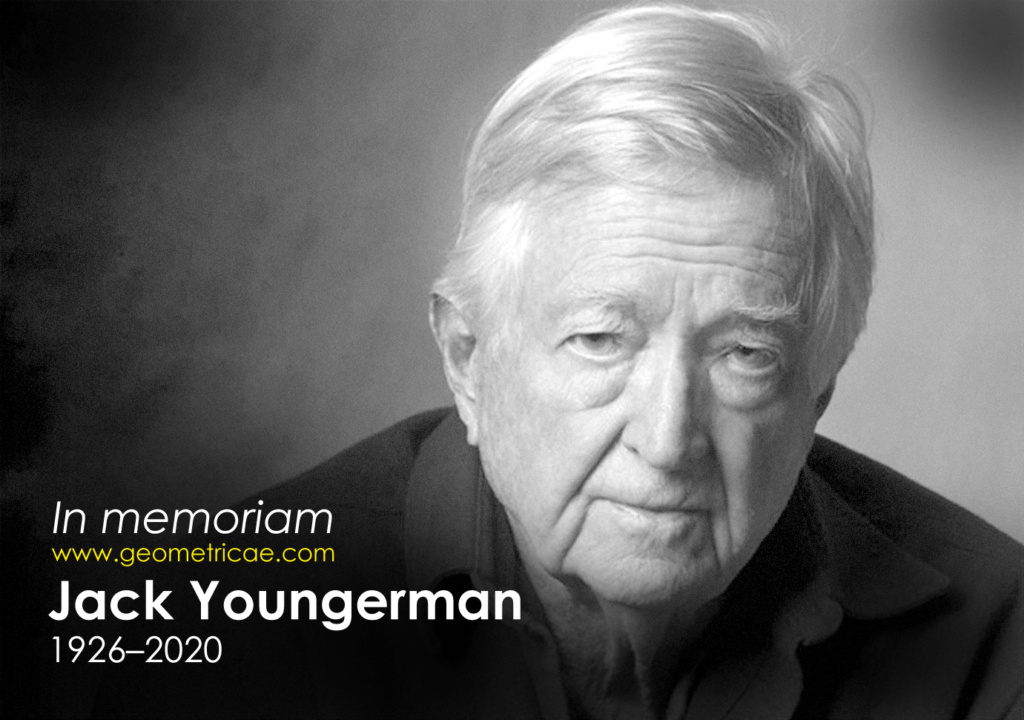 Jack Youngerman was born on March 25, 1926, in Saint Louis, Missouri, and moved with his family to Louisville, Kentucky, in 1929. The artist’s early life was marked by the trauma of his parents’ divorce, the death of an older brother from a drug overdose, and his father’s nervous breakdown and lifelong institutionalization. He took his first art class while studying at the University of North Carolina, Chapel Hill (1944–46), with a grant from the U.S. Navy. In 1947 he graduated from the University of Missouri, which he had attended intermittently since 1943.
After college and with help from the G.I. Bill, Youngerman studied at the École des beaux-arts, Paris (1947–49), remaining in the city to paint until 1955. His years of apprenticeship in Paris were formative ones as he met and befriended fellow students César, Ellsworth Kelly, and Eduardo Paolozzi and visited the studios of Jean Arp and Constantin Brancusi, among others. It was also in Paris that he met and married the actress Delphine Seyrig and experienced the birth of his son Duncan. Delphine’s father was Henri Seyrig, an influential archaeologist, art connoisseur, and future director of the Musées de France. While overseas, Youngerman traveled across Europe and to the Middle East. Along with the works by Georges Braque, Henri Matisse, and Pablo Picasso that he saw in the museums in Paris, his travels eastward had a lasting impact on his work. While in Paris, he realized that he did not want to paint the “soft kind of abstract impressionism”¹ that was prevalent in France in the years after World War II. Youngerman began to incorporate into his paintings the Hard-edge, geometric-abstraction, and Constructivist elements that would characterize his mature style.
In 1956, at gallerist Betty Parsons’s urging, Youngerman returned to the United States, settling in New York. Though working at the same time as the first generation of the New York school, Youngerman differed crucially from these artists by working at a slightly smaller scale and through his affinity for simplified organic forms and geometric abstraction. From 1959 to 1960, Youngerman was featured alongside such contemporaries as Jasper Johns, Kelly, and Frank Stella in 16 Americans at the Museum of Modern Art, New York. In 1977, Youngerman expanded his production from painting and drawing to include freestanding cast fiberglass sculpture, and he later worked in steel and aluminum.
Since his first solo show of geometric abstractions at the Galerie Arnaud, Paris (1951), Youngerman has had many important solo exhibitions, including ones at the Parrish Art Museum, Southampton, New York (1976, 2004); Heland Wetterling Gallery, Stockholm (1989); and Guggenheim Museum (retrospective, 1986). Youngerman received the John Simon Guggenheim Memorial Foundation Fellowship in 1976 and a National Endowment for the Arts Award in 1984. Youngerman left New York in 1995 and lives and works in Bridgehampton, New York.
Youngerman died of complications from a fall in Stony Brook, New York on February 19, 2020 at the age of 93.