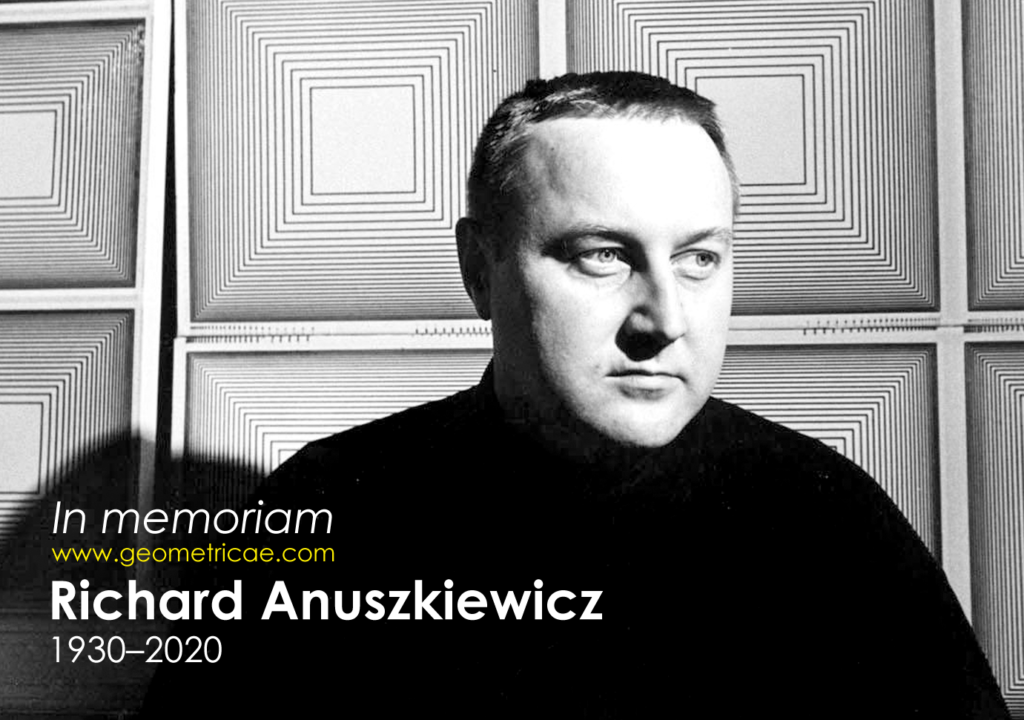 Richard Anuszkiewicz was born in Erie, Pennsylvania, in 1930 and grew to love painting at a very early age. After graduating from the Cleveland Institute of Art in Cleveland, Ohio in 1953, he studied under master abstract colorist Josef Albers at the Yale University School of Art and Architecture in New Haven, Connecticut where he earned his Masters of Fine Arts. Upon graduating in 1955, Anuszkiewicz moved to New York and grew to fame with his concentration on the optical changes that occur when different high-intensity colors are applied to the same geometric configurations. Most of his work comprises visual investigations of formal structural and color effects, many of them nested square forms similar to the work of his mentor Josef Albers. In his series, Homage to the Square (1959), Albers experimented with juxtapositions of color, and Anuszkiewicz continued to develop these concepts. Such interest in the creation and exploration of shapes as optical illusions sparked a new art movement called Op Art during the late 1960’s and early 1970’s which Anuszkiewicz is considered a founder of, with his contemporary being Victor Vasarely in France. Although classified as an Op artist, he does not see himself as belonging to the group as he modeled himself after his mentor Albers. Returning to the Midwest to take a degree in education at Kent State University, where he later taught, he began to really experiment with the full-intensity of complementary colors-blues on reds, greens on reds that set him on his own groundbreaking path. Anuszkiewicz has continued to produce works in the Op Art style over the last few decades. With such critical acclaim, Anuszkiewicz has won many accolades and has exhibited at the Venice Biennale, Florence Biennale and Documenta.