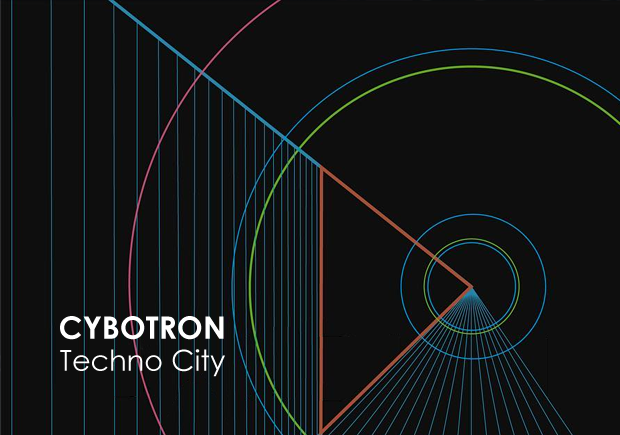 The city is grey, or maybe electric blue, you decide. It’s dawn, and the early morning light bounces off vast towering concrete facades. Or maybe it’s night and huge illuminated panels cast long shadows. You decide. No, on that second point you have no choice, the decision has been made for you. The time is 6:57 am. Precisely.
All the squares, plazas, walkways and streets on the grid are empty. It’s a strange imposing place, stark and brutal, a future city unlike any other, desolate and beautiful. This city has appeared from nowhere. It’s nothing like the city promised from 1950s science fiction and other now archaic visions of the future but a completely different entity – minimal – vast – endless.
It’s 6:57am this we know for sure. We know this because it is announced near the start of the track, it’s often described as a Detroit radio announcer but to this listener it sounds more like the synthesised time-check voice function from the telephone answering machines of the time. The year is 1984. This we know since it was the release date for Techno City by Cybotron.

In the UK Cybotron’s Techno City sat at the end of a compilation LP “Electro Street Sounds Volume 4”. In the States it was already out as a single on the Fantasy label. Who or what was Cybotron? Now you can find the answer to this question in less time than it takes to ask it, in 1984 however you could only guess. To most people it really didn’t matter who was behind the record, the track came from the future, no musician was involved in it’s making there was nothing else you needed to know. Finding out who might be playing the synth, programming the drums or playing the guitar would be to reduce the magic. To even ask the correct question “Who were Cybotron?” would be to know too much. Yes, there is a guitar on this track – brutally cut short at it’s peak as technology cuts in and takes over, flattens it, reasserts it’s dominance and reclaims the sonic space.
Back to our future city. As you stand in the centre of a vast plaza you realise you are not alone. “Welcome to Techno City” a disembodied voice comes from all around you. “Hope you enjoy your stay”.
In an article by the UK critic Jon Savage he notes that the track sat ‘awkwardly’ on the album alongside a Herbie Hancock mega-mix by Grandmaster D.ST and Run DMC’s “Sucker MCs”. To be more accurate it sits at the end of the LP and follows on from the VHB’s Beethoven’s Fifth (Street) Symphony which in turn follows Key-Matic’s “Breakin’ In Space.” These tracks had a novelty element to them but had a similar intent to Techno City – to refashion the old and place into a futuristic context. This is important to note because it’s placement on the album is perfection. What has been missed is that side one ends with the Herbie Hancock mix which includes the futuristic electro-funk of ‘Rockit’ and more importantly, in this case, ‘Future Shock’ both tracks from Hancock’s album also called Future Shock. This is no coincidence as Future Shock refers to a novel by Alvin Toffler that was a huge influence on Cybotron. So having Hancock’s Future Shock included at the end of side one is mirrored by having Techno City, a vision inspired by Toffler and the decline of Detroit, at the end of side two.

Detroit was home to Cybotron’s Juan Atkins and Richard Davis. The city was in decline which enabled the artists, musicians and innovators to use the space as they always do, regenerating the culture until such a time as big business and property developers can move in again and take over again and claim the new vibrancy and success as their own.  At the time Techno City was a reimagining of the space, a dream space which would soon impact electronic music for decades to come.
Techno city is often cited as the first techno track although there seems to be be little similarity to the genre that had yet to be invented. Certainly there is a clinical atmosphere but it also has the warmth of old technology in the synth sounds, similar to the human qualities in Kraftwerk that they tried so hard to remove. The hard kick drums and ricochets of drum machine hand claps have something in common with the genre but it’s really not a techno track as such, more of a marker and a statement of intent saying: You have arrived at this point, now within this city and within this space, you have the opportunity to join us in forging a new sound. So that’s what Juan Atkins did. At the same time Detroit’s Kevin Saunderson and Derrick May were also pursuing a similar path so much so that they became known as the Belleville 3 (Belleville being a suburb of the Detroit Metropolitan area), the godfathers of techno, despite never really working together at the time.

Listening to the track now it is neither electro or techno, it sits between two future worlds acting as a facilitator or a wrapper that contains a codec for the future. It still holds up today due to it’s deceptive simplicity. Opening with sounds that evoke wide grey shimmering spaces of a vast city, the drifting hazy vocal effects, a time check, a voice booming across the space. The visitor then spends the rest of the time looking round, craning his/her neck up at vast overwhelming edifices. The reverbs and delays locate every sound within the space, it really does have the qualities of crossing vast intersections and hearing waves of analog synths rolling down the grids towards you then being swept behind you as you turn sharply into the next street to be greeted with more unimaginable architecture. It’s both a lonely space and a welcoming place, it’s really up to you what you bring to it. At the the time perhaps it sounded quite an easy production, something easily replicated, yet there has never been a track to match it, millions of pioneering electronic tracks but only one Techno City.

This article refers to the Original 1984 6m55s vocal version on Fantasy Records.This mix of the track is currently not on the main streaming services.
We have found a YouTube video for reference: