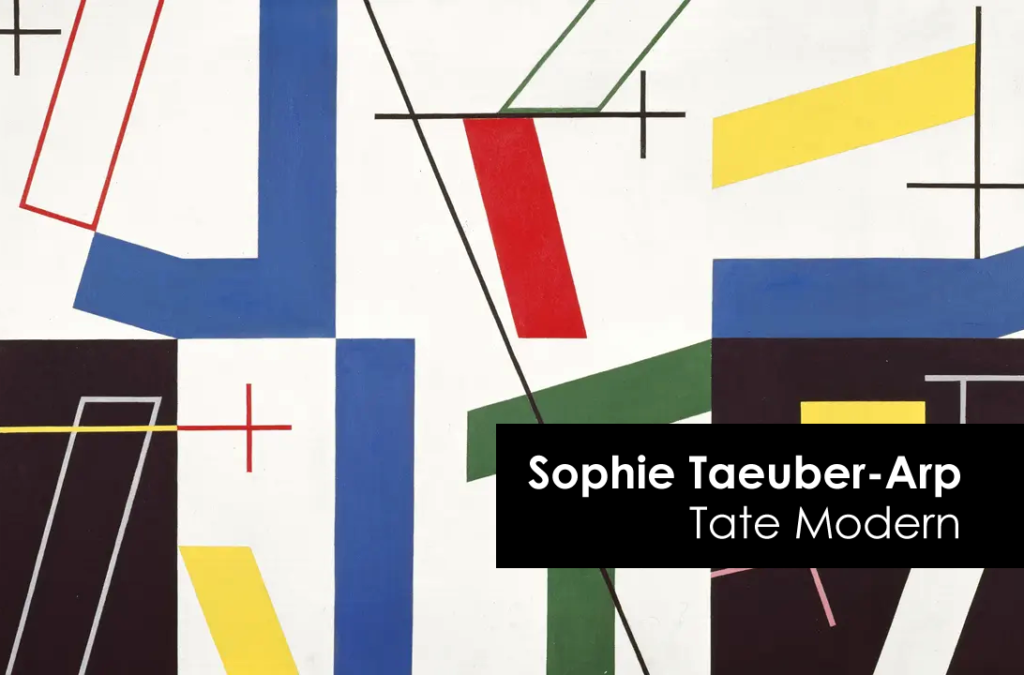 Sophie Taeuber-Arp was one of the foremost abstract artists and designers of the 1920s and 30s. Her multidisciplinary work has enduring influence, inspiring innovative artists and designers around the world.
Taeuber-Arp’s creative output was extraordinarily diverse and at times controversial. She made embroideries and paintings, carved sculptures and edited magazines, created puppets and mysterious Dada objects. She combined traditional crafts with the vocabulary of modernist abstraction, challenging the boundaries separating art and design.
This is the first retrospective of her work ever held in the UK. It brings together her principal works from major collections in Europe and the US, most of which have never been seen in this country before.
Born in Switzerland, Taeuber-Arp left home at eighteen to continue her studies in textile design in Germany. When she returned to Zurich in 1914, she taught at the Applied Arts department of the Trade School and began to produce non-representational works on paper often used as designs for her textiles, embroidery and even costumes. These works were influenced by her training in textile design and saw the beginning of an extraordinarily diverse career.
During her life, Taeuber-Arp worked as a designer, teacher, puppet maker, architect, painter, interior designer, sculptor, performer, jewellery-maker, illustrator, and magazine editor. Through her precise but playful work, she fulfilled a desire to ‘make the things we own more beautiful.’
Having studied at schools which emphasised the interrelationship between art and craft, Taeuber-Arp rejected the idea that applied art was less important than fine arts such as painting. Instead, she applied artistic principles to designs for practical objects, such as furniture and fashion. This included cushion embroideries, beaded jewellery, and designs for rugs and textiles. In turn, Taeuber-Arp challenged the traditional boundaries separating fine art from design and argued that art was inextricably tied to daily life. This idea was particularly controversial in the period between the First and Second World Wars.

Only when we go into ourselves and attempt to be entirely true to ourselves will we succeed in making things of value, living things, and in this way help to develop a new style that is fitting for us. – Sophie Taeuber-Arp

Working first in Switzerland, then France, Taeuber-Arp developed her distinctive visual style during the First World War. While other artists reached abstraction through a gradual process of breaking down and simplifying figurative forms, she drew directly on the grid structures of textiles. This approach stood apart from other modernist artists working at the time.
First, she developed a group of vertical-horizontal compositions. Created between 1916 and 1925, they all have a grid structure and carefully thought through colour scheme. This modular concept, inspired by textile structure, demonstrates the artist’s creative process. This approach opened the way to further inventions and her later experiments with textiles, jewellery, architecture, furniture, stained glass and painting.
In the 1930s, Taueber-Arp began working on a series known as ‘multispace compositions’ and ‘schematic compositions’ constructed on a white or black background from aligned circles, squares, rectangles and crosses. The elements retain a sense of movement and were compared to pieces in a game which could be moved around. Art critic and writer Gabrielle Buffet-Picabia recalled that Taeuber-Arp compared her compositions to the popular game of boules.
Switzerland remained neutral during the First World War. Artists, writers and thinkers from across Europe who wanted to escape from the conflict settled in Zurich. The city became a centre for the avant-garde. Among them was fellow artist Hans (Jean) Arp, who would become Sophie Taeuber’s lifelong partner. They married in 1922.
One of the most radical movements to emerge as a result of the war was dada. This group of artists, poets and performers challenged the rationalism and social conventions that they believed had led to the war. Taeuber-Arp was a key member and one of the few women artists within the group. She embraced dada’s absurdist, playful and radical practices. A photograph from the time shows her performance at the opening of Galerie Dada in 1917, dancing to founder of the dada movement, Hugo Ball’s sound poems in an avant-garde costume and mask. From collages and watercolors to stage sets and sculptures of abstracted heads, Taeuber-Arp’s works from this time are considered icons of the dada period.
In the late 1920s and early 1930, Taeuber-Arp’s focus shifted to architectural and interior design. In 1926 she and Arp were invited to redesign a wing of the Aubette building in Strasbourg as a modernist entertainment complex. Given the scale of the project they asked the Dutch artist Theo van Doesburg to join them. Taeuber-Arp took sole charge of the design concept for the Five o’Clock Tea Room, the Aubette Bar and the Foyer Bar, while collaborating with Arp and van Doesburg on other elements. The dynamic abstract environments she created immersed the viewer in geometric shapes and vibrant colour. Taeuber-Arp’s exploration of applied art and design expanded from objects into the lived environment.
The café commission brought her international acclaim. She joined several artists’ organisations, including the abstract artists’ group Cercle et Carré, edited and wrote for radical publications, and exhibited her work throughout Europe alongside artists Sonia Delaunay, Wassily Kandinsky, Le Corbusier and Piet Mondrian.
In 1943, Taeuber-Arp sadly died from accidental carbon monoxide poisoning. She was 53 and one of the most successful and innovative artists of her time. Following her death, her husband Hans Arp worked to promote her legacy, in part by producing a number of posthumous ‘re-creations’ of her works. Her influence on design and art continues today.