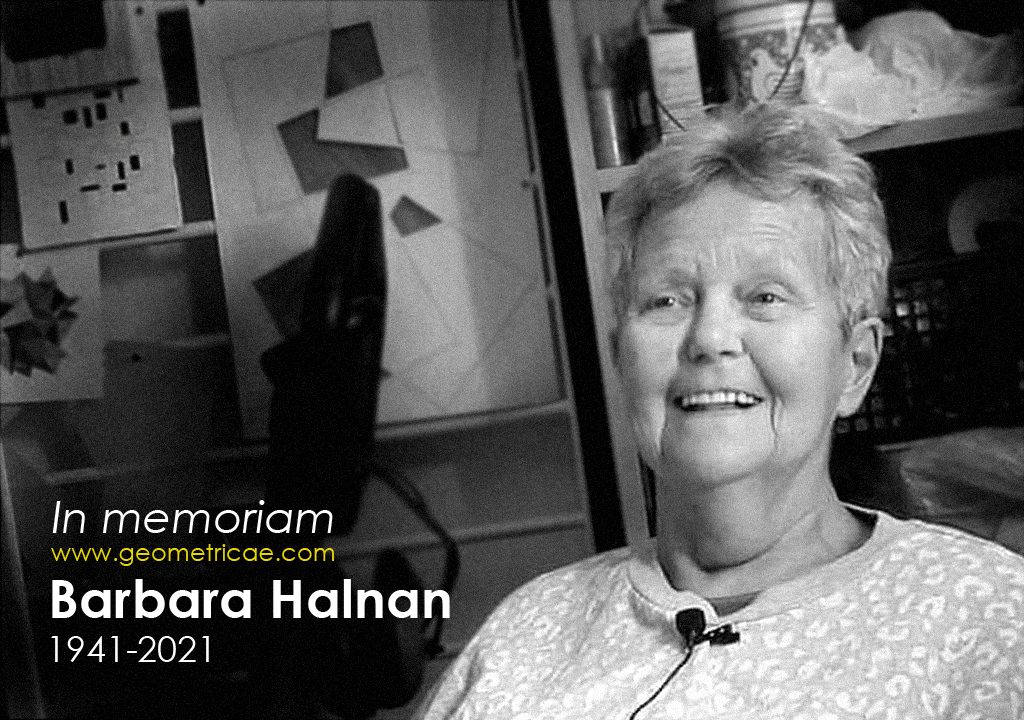 Barbara Halnan studied printmaking (engraving and serigraphy), life drawing and design at London Middlesex Polytechnic, at East Sydney Technical College and at Free Academy in the Hague, Netherlands.
She was awarded with the NAVA Marketing Grant (1995) and Status Graph Award for digital art (2001).
Her work was exihibited, among others, at Salon des Réalités Nouvelles in Paris (2011, 2012, 2013), at Articulate Project Space in Leichhardt, Australia (2011, 2012), at Factory 49 in Marrickville, Australia (2008-2012) and at Level 17 Artspace at Victoria University in Melbourne (2009).
“Much of my work is to do with progressions—of colour, tone, form, and the patterning which results from interacting elements. My current interest lies in the correspondence between visual imagery and the sounds of musical expression and over this past year I have been experimenting with the relationship between aural and visual patterning, specifically with the numerical sequencing in twelve-tone melodies such as those employed by composers such as Messaien and Webern.
I have been working on studies, panels and structures which translate twelve-tone numerical sequences into visual form, taking them through permutations, inversions and regressions. The art of the composer lies not only in the creation of the melodies, rhythms and harmonics which constitute a work, but also in making decisions about which instrument or instruments are appropriate to the work. In this parallel universe the artist has had to make decisions about format, colour, size, materials. This has been the other element of my exploration.
My use of metallic pigments—bronze and aluminium powders and graphite—in these panels has to do with my initial perception of the quality of the sounds of musical tones. There is a possibility that as the work progresses colour may become another element.
The other aspect of the work I have done over recent months is the return to what I call “installed constructions” — works which combine and contrast drawing directly on the wall of the gallery with three dimensional forms made of lines, thereby creating a drawing in space. There is a quality of the ephemeral in these works which perhaps relates to the performance of a musical work—now you see/hear it, now you don’t.” (Barbara Halnan statment for 2013 exihibition at A-M Gallery)