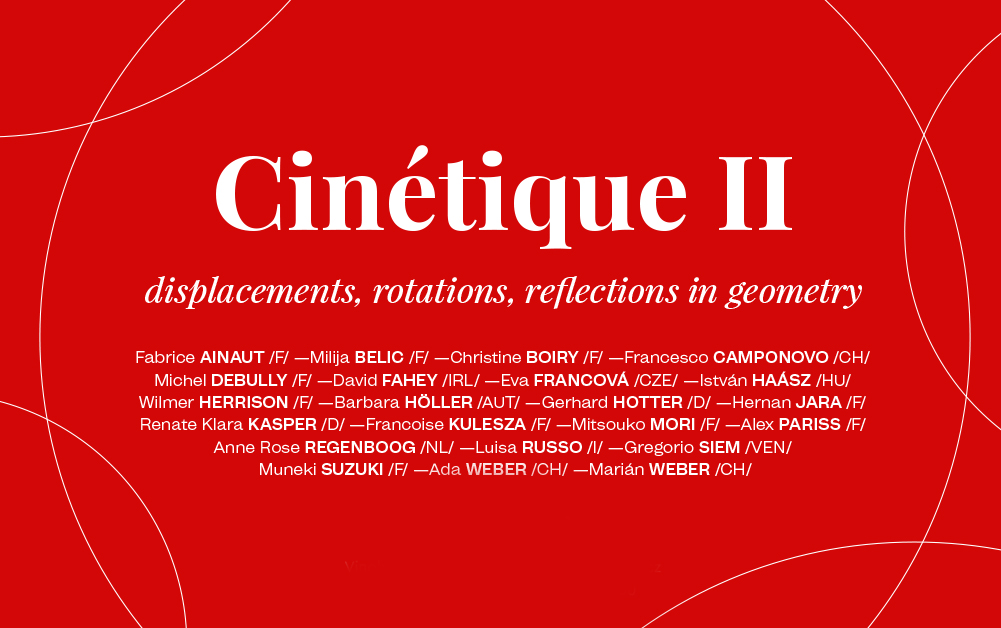 The traveling group exhibition, conceived by curator Milija Belic, was presented in 2018 in Paris, then in Basel, Hamburg, Vienna, Budapest, Novigrad, Stoffen and now in Prague. 22 artists from 10 countries (Czech Republic, France, Ireland, Italy, Hungary, Germany, the Netherlands, Austria, Switzerland, Venezuela) developed the theme of movement in abstract geometric language in a small format.
The direct recognition of the inseparability of space and time has revolutionized contemporary creative thinking. This can be seen in the latest scientific theories. Movement and rhythm now find their way into artistic practice and are often forced upon as the only real theme and indisputable characteristic of modernity – mainly due to the constant further development of a particular art. The view, still fixed for a moment, is now beginning to expand into time periods, either on the basis of actual movement or through the concurrence of individual moments, which subsequently cause a fictitious movement on the retina. Kinetics, with all its perceptual and psychological effects, turns into optics and shows a work that, in its entirety, includes not only the essentials, but above all the existing ones. This creates a new dialectic of the real and the imaginary, which creates spatially dynamic images and forms. Reality and matter appear as flowing energies. The image opens fragmentarily at its interfaces: movement and rhythm become the source of new forms of expression. It is no longer a matter of reproduction or imitation, but of a plastic analogy based on the capture of dynamic and living reality, forms that include not only space but also time, forms that can no longer be separated. The idea of ​​time. The artist creates time and space. The Cubists, who followed Cézanne’s well-trodden path by splitting the visible world, the futurists with their dynamizing view, which began with experimental photography of Muybridge and Marey and then led to Duchamp’s conceptual art, without neglecting Russian constructivists. Malevich’s extrasensory suprematism and its cosmic perspectives, Mondrian’s idealized neoplasticism or the light orphism of Kupka and especially the Delaunay, all of this seems to be the forerunners of art, which is now rightly called “kinetic art.” This artistic current, represented by its historical protagonists such as Vasarely, Soto, Agam, Morellet, Cruz-Diez, Le Parc or Molnar, has been at the heart of current events in recent decades. It is deeply rooted in a predominantly geometrizing aesthetic, a faithful expression of the sensitivity closely associated with the new galloping and irreversible era of digital technology, and the teachings of highly complex cyber logic.
This exhibition shows a growing interest in kinetic ideas and visions based on the perception of time and the integration and integration of the resulting movements and rhythms into contemporary creative thinking.